Q: The names of which pair of Shakespearean characters appear on the astronomer Tycho Brahe's coat of arms - in the list of his ancestors?

A: Rosenkrantz and Guildenstern. Tycho Brahe was the Danish astronomer whose precise astronomical measurements served as the basis of Kepler's laws of physics. A portrait of Tycho Brahe contains the names "Rosenkrans" and "Guildensteren" among the ancestors on his coat of arms: 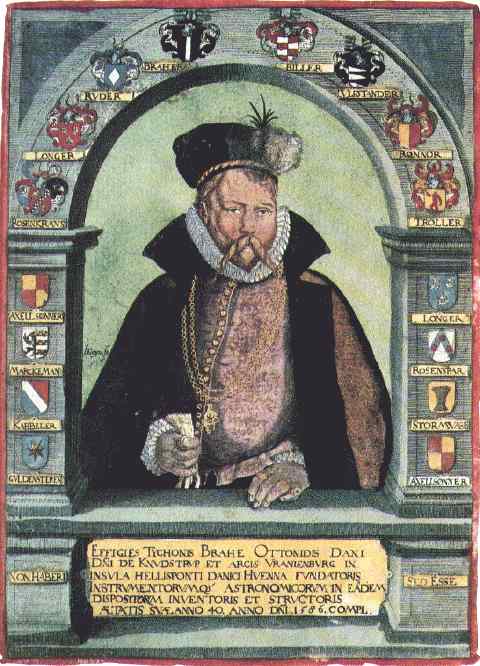 Eric Altschuler of U. C. San Diego has used this and other pieces of evidence to argue that Shakespeare was an astronomer. For example:

However, Tim Silverman has given what seems to me like a better explanation. He answered my puzzle as follows:

Rosenkrantz and Guildenstern. By a bizarre coincidence, I was just talking about this on usenet with someone who's looking into medieval and renaissance Scandinavia for a story she's writing.

Shakespeare's characters are assumed to have been based on Frederick Rosenkrantz and Knud Gyldenstierne, who were present on an embassy to England in 1592, and were respectively Tycho's third cousin and some other sort of cousin.

The Rosenkrantz and Gyldenstierne families were major players in Denmark's aristocracy over several generations, as were the Brahe family and the Bille family (Tycho's mother's family). And, in the words of my usenet interlocutor, "the nobility married amongst themselves a lot."

She also pointed me to this genealogy. The astronomer is not the Tyge at the top but the one directly under him two generations later.

My other source was:

which talks about Rosenkrantz and Gyldenstierne on pp. 261-2.

Sources: The Independent, November 5, 1998, p. 7. They cite an article by Altschuler in the online magazine PhysicsWeb, which in turn refers to the following paper:

The picture of Tycho Brahe's coat of arms comes from here:

Tim Silverman posted his information at the n-Category Café.

For more fun try these: